How can reef fish-derived nutrients help corals under temperature stress? 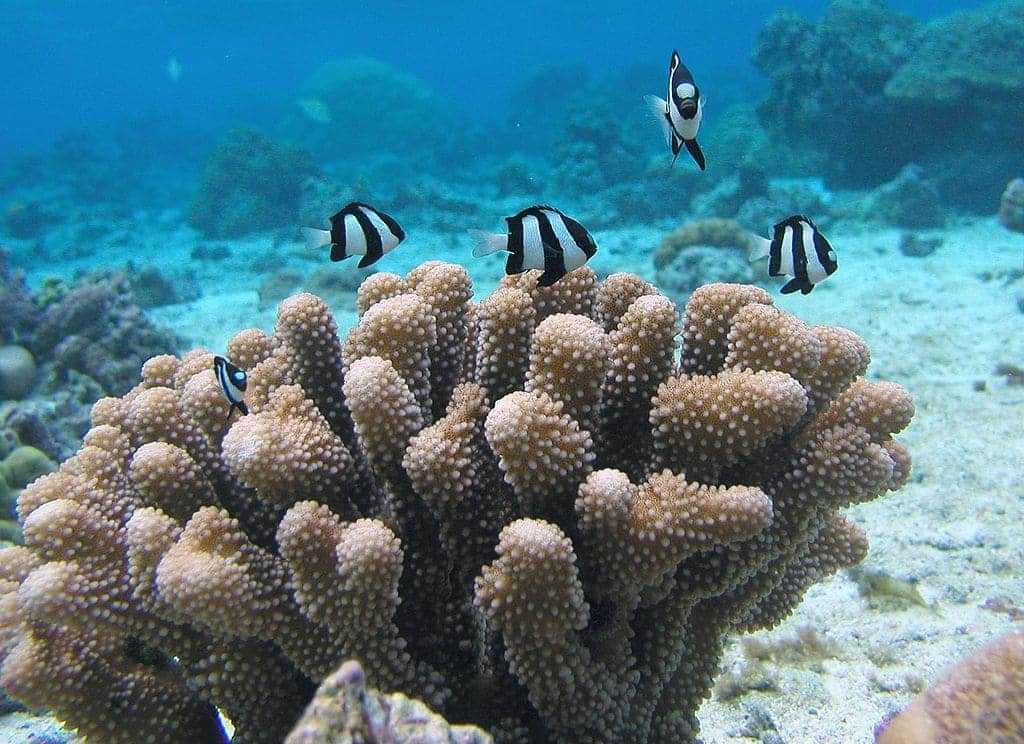 The staggering biodiversity encountered in tropical coral reefs primarily results from the mutualistic symbiosis corals developed with endosymbiotic algae* from the family Symbiodinaceae. Thanks to their ability to photosynthesize, these algal symbionts provide their host with most of the sugar rich compounds they require to sustain their daily metabolism (Tremblay et al, 2012). In turn, the coral host takes up vital nutrients from the seawater and transfers them to its algae to maintain their rate of photosynthesis, and offer them a safe place to hide from predators (Grover et al, 2002).

In addition to the symbiosis they form with such dinoflagellate algae, reef corals are engaged in an array of other positive interactions in reef ecosystems, such as the ones with reef fishes. These consumers deliver substantial amounts of nitrogen and phosphorus in the water column, which could benefit corals, especially during periods of thermal stress.

Previous studies conducted under controlled conditions (Ezzat et al 2016; 2019; Wiedenmann et al. 2013) and in the field (Burkepile et al. 2020; Vega Thurber et al. 2014) using fertilizers underlined the beneficial effects of increased nitrogen (under the form of ammonium specifically) and phosphorus concentrations on coral physiology and survival.  An important step forward was to investigate how these manipulative experiments using fertilizers relate to ecologically relevant conditions in reef ecosystems, in the presence of consumers such as reef fishes.

A team of researchers lead by Dr. Andrew Shantz (Florida International University) carried out a tank experiment in Moorea (French Polynesia) in which they exposed Pocilloporid corals and damselfish from the species Dascyllus flavicaudus to different temperature treatments, including temperature-inducing bleaching (i.e. >30°C). D. flavicaudus is known to find shelter within Pocilloporid corals and scientists were therefore eager to investigate the influence of fish-derived nutrients on coral physiology and thermotolerance.

Their results recently published in Global Change Biology – first demonstrated that corals exposed to ambient temperature showed greater symbiont density and increased photo-physiological function (understood as photosynthetic activity) when exposed to damselfish for two weeks. Under a 10dy – thermal stress period (+3°C), corals exposed to fish-derived nutrients maintained their growth rate, symbiont and protein concentration – while corals deprived of damselfish showed reduced metabolism and signs of bleaching. Overall, these results indicate that the presence of damselfish alleviated the deleterious impact of increased temperature on coral physiology – ultimately delaying the breakdown of the symbiosis.

This study adds to the growing body of evidence demonstrating that positive and common interactions between organisms are beneficial for ecosystem functioning, and for the persistence of species in the context of global change. Here, more work is required to better elucidate the physiological mechanisms underpinning important biotic interactions between organisms in coral reefs and more importantly to predict how these relationships may change in light of major ecological and societal challenges, ultimately reinforcing the need/urgency to undertake concrete actions to preserve marine biodiversity.

* Endosymbiotic algae: it is the mutualistic symbiosis between two organisms where each part benefits from the other, and one of them living inside the other. In this case, microalgae from the family Symbiodinaceae live inside the tissues of the polyps, and they both benefit. More info in our previous article.

Impact of sunscreens on coral reefs

Overall, what is the impact of UV filters in sunscreens on corals?

Around the world, coral reefs are facing a degradation driven by global and local human-derived pressures including climate change, coastal development, pollution, amongst others. In…