The impacts of climate change on coral reefs

How is the increase in water temperature threatening marine biodiversity in the Mediterranean? 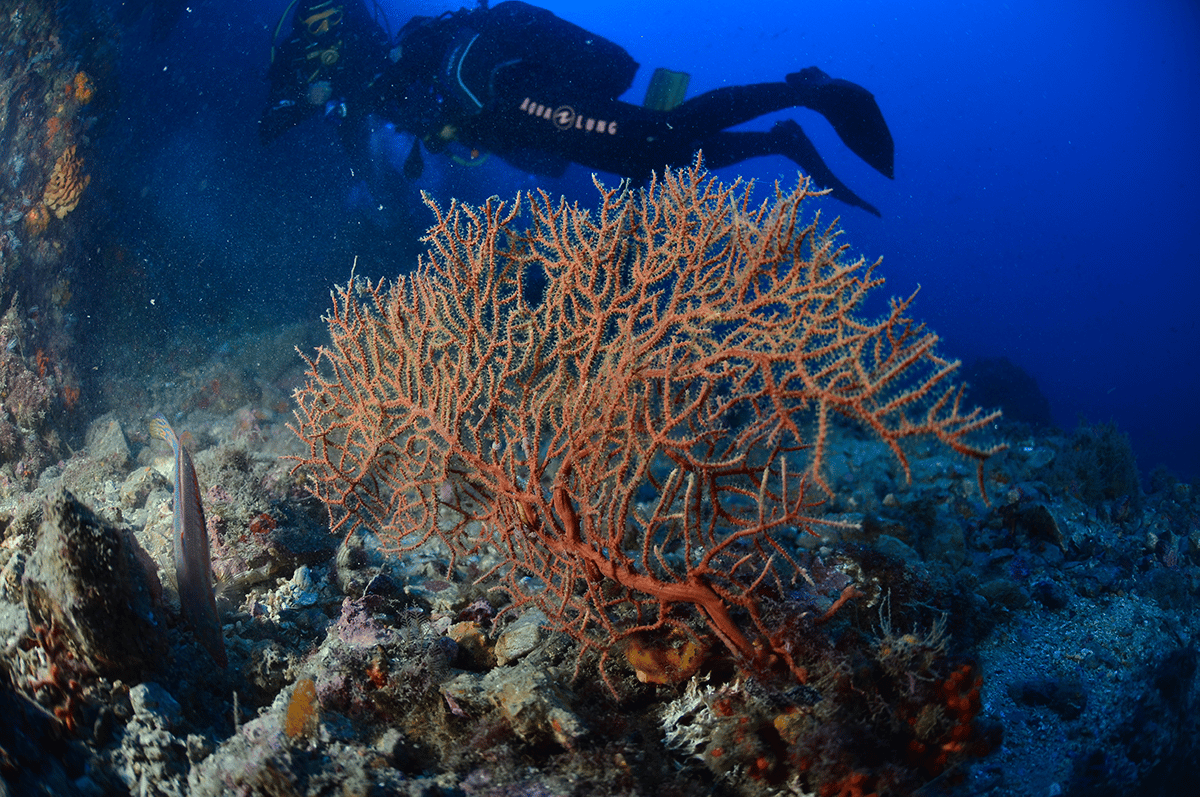 When it comes to rising sea temperatures and its effect on marine biodiversity, Australia’s Great Barrier Reef (GBR) is often referenced as the case study to follow. The iconic reef is the largest continuous coral ecosystem in the world and is currently recovering from its sixth mass bleaching event since 1998 [1, 2]. While attention is often paid to the GBR, rising sea temperatures are causing negative effects all around the world, from Antarctica to the Mediterranean [3, 4]. A recent study published in Global Change Biology by Joaquim Garrabaou and a team of international researchers from over 10 different institutions highlights that the Mediterranean has undergone five consecutive years of marine heatwaves and mass mortality events between 2015-2019 [3].

Marine heatwaves are defined as a prolonged anomalous increase in water temperature within a particular location. Temperature increases within marine habitats has been known to affect biodiversity in a myriad of ways – algal blooms, altering critical biotic factors, and disrupting life cycles [3-5]. Climate change has increased the frequency and duration of these heat waves, and in the Mediterranean, they were found to have noticeable impacts on 50 taxa across 8 phyla* [3]. But what exactly does that mean?

* Taxa refers to a group of one or more populations of an organism or organisms. Phyla is a taxonomic rank above class and below kingdom. Eg: Mollusca is a phylum to which bivalves, cephalopods and gastropods all belong. These three are taxa within Mollusca, and each represents hundreds of different taxa of lower rank (families, species etc.).

The findings of Garrabou et al. (2022) through their five-year study were clear. Between 2015-2019, average sea surface temperature (SST) in the Mediterranean was 1.2 ± 0.23°C above the 1982-1986 period (when records began; Figure 1 below), and three of the survey years were marked with SST higher than in 2003, when the region experienced its most damaging marine heatwave on record. The Mediterranean was found to be heating up at three times the global average. Consequently, temperature increases were recorded at depth, with an average temperature at 40 meters deep that was 47% higher than the overall 1982-2019 average. 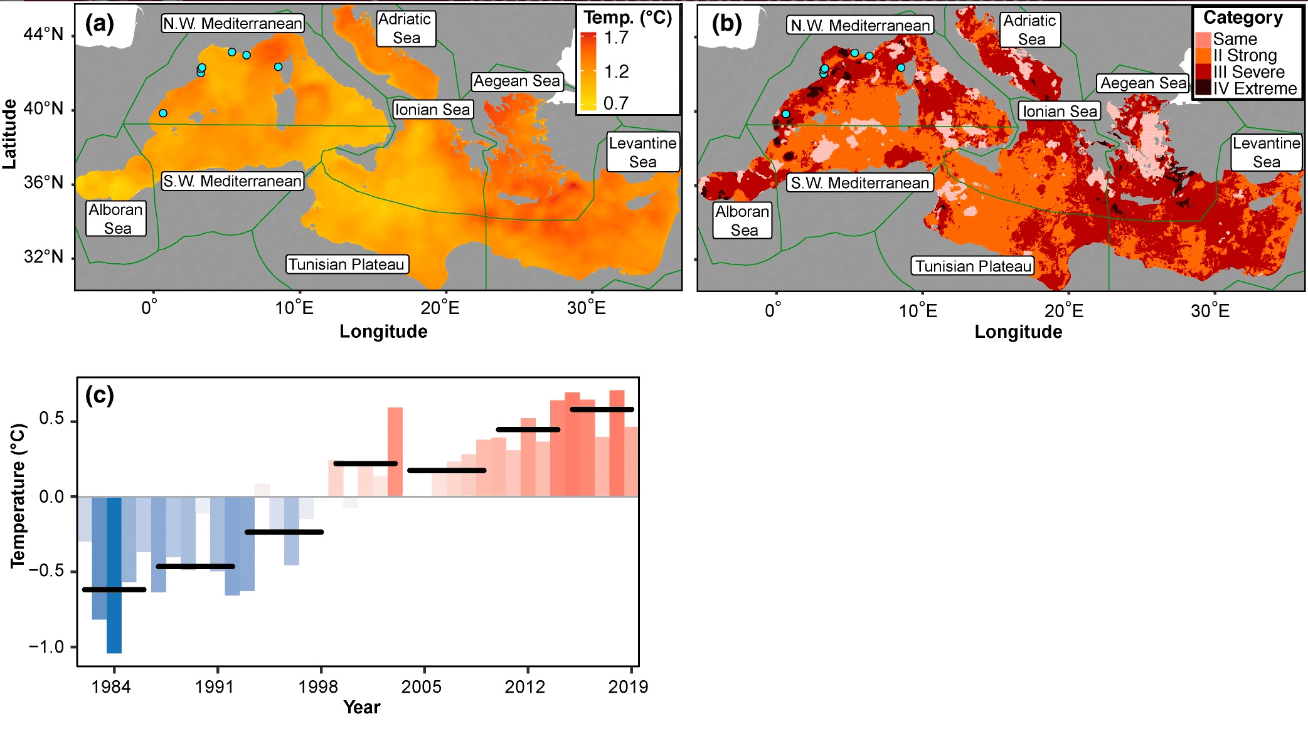 FIGURE 1. Patterns of warming and marine heatwaves across the Mediterranean Sea. (a) The difference in temperature between the mean of 2015 to 2019 minus the mean of 1982 to 1986. Green lines and blue dots have been added to visualize, respectively, the Mediterranean ecoregions and the monitoring areas with in-situ (along depth) temperature monitoring (also in panel b). (b) The highest category of marine heatwaves experienced from 2015 to 2019 at locations where a moderate heatwave was experienced in 1982 to 1986. Light pink areas show when a strong or greater heatwave occurred in the earlier period. (c) Annual sea surface temperature (SST) anomalies from 1982 to 2019 (climatology period is 1982 to 2019). Horizontal black bars show 5-year averages over the time series. Figure and explanations modified from Garrabou et al. (2022).

This translated to noticeable pressure and damage on the marine biodiversity of the Mediterranean. Through 2015-2019, 58% of biodiversity surveys (567) up to a depth of 45m recorded evidence of mass mortality among 50 taxa and 8 phyla, with the 15-25m depth range being the most affected. Cnidarians (eg: corals, soft corals, anemones; 54.0% of observations), Bryozoa (Moss organisms; 10.6%), and Rhodophyta (Red algae; 8.3%) were found to be the most concerned by mortality events. All coastal habitats within the Mediterranean were affected, but damage disproportionately affected organisms on hard substrate – specifically coral assemblages in shallow zones and seagrasses.

These observations are in-line with previous research focusing on the effects of marine heat waves in the Mediterranean [6]. Additionally, this study highlights differences between how temperate and tropical marine ecosystems react to high SST, with the impact in the Mediterranean felt at a larger scale than what is observed in tropical areas such as the Great Barrier Reef [7]. These results point to a Mediterranean basin in the midst of an environmental crisis, with the authors of the study warning that current patterns could lead to “local, regional, or even pan-Mediterranean  ecological  extinctions  of  species,  widespread structural  and  compositional  changes  of  ecological  communities” [3].

Adding credence to this assessment are similar recorded changes having been observed among coral reefs in tropical areas following major bleaching events with functionally unique species especially at risk [8]. Based on current understanding and research, a specific set of organisms, the Mediterranean’s soft corals or gorgonians, is expected to suffer the most [3]. Gorgonians provide a much needed structure and shelter for local biodiversity and are critical to the survival of many species. These organisms are one of the basin’s functionally unique organisms and one of the most affected by heatwaves. Decline in gorgonian organisms would cause significant consequences to the Mediterranean’s benthic ecosystem, and subsequently local economies reliant on the marine environment.

Conclusion: What does this mean for the Mediterranean?

The increasing frequency and intensity of marine heatwaves is driving a major mass mortality event globally, but there has been a particularly fast and damaging shift in the Mediterranean, according to the recent findings of Garrabou and collaborators [3]. The changing climate is having deeper, widespread impacts that go beyond certain models and predictions made by scientists. Additionally, the interactions and services provided by marine biodiversity in the Mediterranean is not fully understood – emphasizing the need for more studies to be undertaken to improve our knowledge. The only certainty that can be drawn from our current understanding is that marine heatwaves and mass mortality events are likely to become the new norm [1, 9].

If you are located around the Mediterranean Sea, you can contribute with your observations of the presence and health of marine biodiversity on the citizen science platform Observadores del Mar: https://www.observadoresdelmar.es/About.

[4] Stephen P. Leatherman, (2021) “What’s driving the huge blooms of brown seaweed piling up on Florida and Caribbean beaches?”, The Conversation.

Are super-corals really a super solution ?

Written by: Richard Singhroy Acknowledgements to Dr. Emma Camp   While reefs are adaptable ecosystems, they are struggling to adapt to the quick changes brought…

Written by: Richard Singhroy Acknowledgement to Dr. Emma Camp   From the deep sea to the arctic frontier and tropical coastlines, corals have formed the…

Climate-impacted reefs may continue to supply vital micronutrients through fisheries

Acknowledgements to James Robinson.   Coral reefs rank among the most productive and diverse ecosystems on Earth – including more than 700 coral species and…